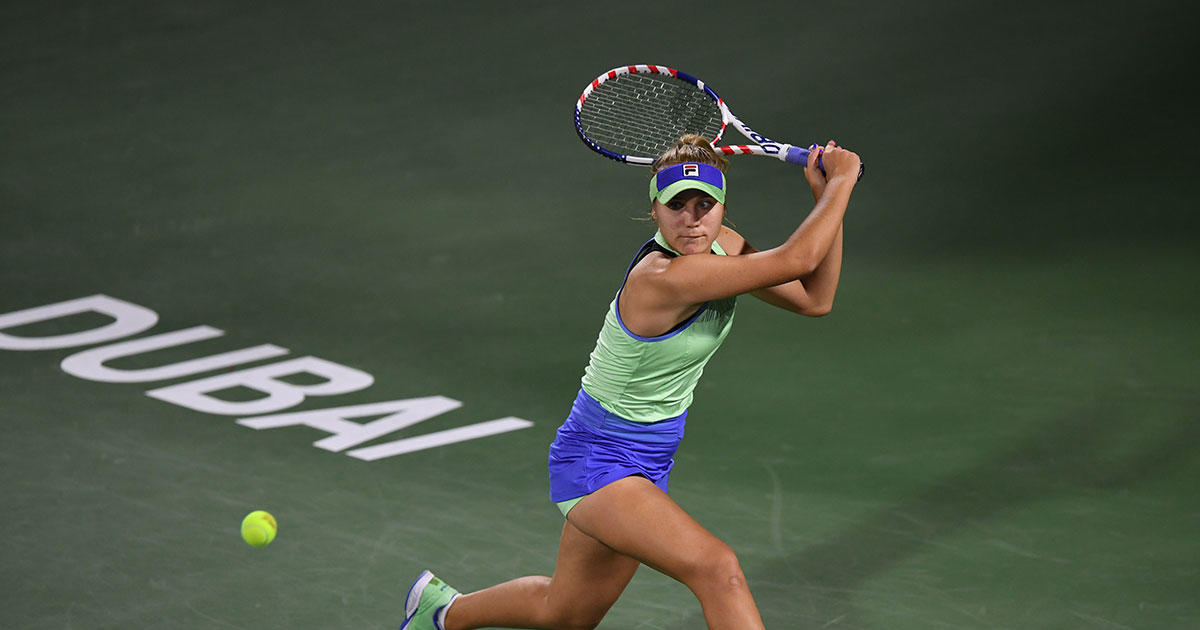 World number seven Kenin's loss completed a hat-trick of seeded upsets on the fourth day of action in Dubai.

Sofia Kenin lost her first WTA match since winning the Australian Open earlier this month as she went down 6-7 (2/7), 6-3, 6-3 to Elena Rybakina on Tuesday at the Dubai Championships.

World number seven Kenin's loss completed a hat-trick of seeded upsets on the fourth day of action in Dubai.

The 21-year-old went down in just over two hours to her 19th-ranked opponent who stood 192nd in the world a year ago.

"There's a bit more pressure coming from my side (after first Grand Slam win). But I've just got to try to manage it for the next tournaments," said Kenin.

"I just didn't feel my game really well. I just made too many unforced errors, I didn't take my chances. I felt really off the whole match."

Kenin got away to an early break but lost it and had to win the first set in a tiebreaker. Rybakina then dominated the next two sets to reach the second round where she will face Czech Katerina Siniakova.

"I prepared with good practice. I didn't expect that I would win. I tried to do my best," she said.

"I wasn't nervous (after flying here from Russia) at all because I knew it's going to be tough.

"I didn't think about that she just won the Australian Open, I know that now everyone can beat everyone," she added.

Belarusian Sabalenka will face her doubles partner Elise Mertens, who is ranked 22nd in the world, in the second round on Wednesday before top seed Halep takes on Tunisian Ons Jabeur.

"We played so many times before. she's a great player," Sabalenka said of Mertens.

"I know she's a big fighter. I'm just going to out there and enjoy the fight. I don't want to focus on that she's my doubles partner, like we are friends and something. It's going to be a big fight."

Earlier, Bencic ran off the first 19 points against Anastasia Pavlyuchenkova before collapsing to a 1-6, 6-1, 6-1 loss.

Pavlyuchenkova could not have made a worse start before advancing in 92 minutes.

"It's tennis, sometimes it happens," the 31st-ranked Russian said.

"You go out there and you just don't feel anything. I just kept on fighting, still trying to hit every ball, trying to be there.

"Slowly I started to turn it around, I started to find my game. In the third set, it was a good level from both of us."

The shock defeats leaves the spotlight to Halep and second-seeded Karolina Pliskova, who begin in the second round after byes.

Svitolina had little to offer as the 52nd-ranked Brady gained her second victory this season over a Top 10 opponent after beating Ashleigh Barty in Brisbane.

The Ukrainian's usually steady game was nowhere to be found at the Aviation Club as first-round play concluded.

"It was not a bad start, but then everything just went downhill," Svitolina said.

"I wish I could regroup better. In the end, I didn't feel so good the ball. Just everything was all over the place today.

"Before I was more composed with my game. Now it's little bit of a struggle. Maybe mentally or something."