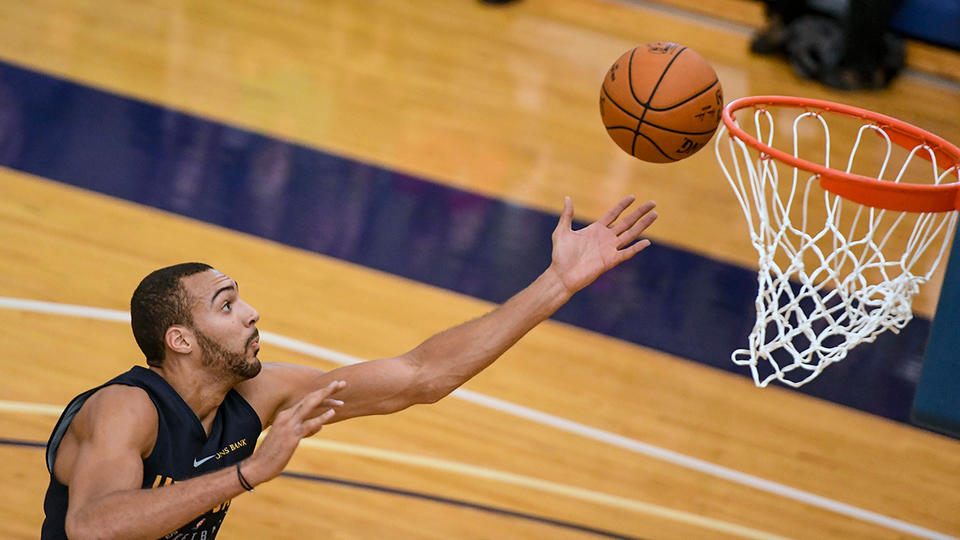 Jazz center Rudy Gobert had tried to show that coronavirus fears were overblown.

The National Basketball Association will suspend its season after a player tested positive for coronavirus, upending the league’s attempts to maintain business as usual during the outbreak.

A player on the Utah Jazz received the diagnosis on a preliminary basis, the NBA said in a statement Wednesday. The test result came shortly before the Jazz were to play the Oklahoma City Thunder, and the game was scrapped.

“The NBA is suspending game play following the conclusion of tonight’s schedule of games until further notice,” the league said. “The NBA will use this hiatus to determine next steps for moving forward in regard to the coronavirus pandemic.” The NBA later announced it was also suspending the season for its developmental league, the “G League.”

The player who tested positive for Covid-19 wasn’t in the arena when the Jazz game was about to take place, the NBA said.

Earlier, Jazz center Rudy Gobert had tried to show that coronavirus fears were overblown. He touched every microphone and recorder while discussing the situation with media, which has been barred from locker rooms and clubhouses of major U.S. sports leagues.

The team later described him as suffering from an “illness,” but the NBA didn’t say whether he was the player who tested positive. Citing unnamed sources, ESPN identified Gobert as the player in question.

The development capped an already dramatic day for the US sports world, with the NCAA deciding to bar fans from the March Madness college basketball tournament, and Major League Baseball and National Hockey Leagues reshuffling schedules to cope with the outbreak.

It’s a particularly awkward time for the NBA to suspend its season since the playoffs begin in about a month and teams were vying for position.

The decision - coming less than 24 hours after a number of NBA teams were adamant that their games would continue with arenas full of spectators - also shows just how quickly the sports world is rushing to update its approach to the virus.

And it cast immediate doubt on the future for sports currently in season -- like the NHL, Major League Soccer and college basketball -- and leagues like MLB, which is scheduled to start later this month. It will also likely add pressure to the organizers of the 2020 Summer Olympics, which are slated to start in Tokyo in July.

The NHL released a statement late Wednesday acknowledging the NBA’s move, without saying what it planned to do.

“The NHL is continuing to consult with medical experts and is evaluating the options,” the league said in a statement online. “We expect to have a further update tomorrow.”